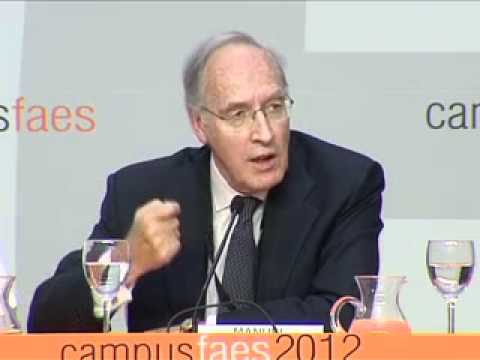 Navacerrada (Madrid), 03.07.12.- The chairman of Baker & McKenzie España and permanent member of the Real Academia de Jurisprudencia y Legislación, Manuel Pizarro, has participated in the 2012 FAES Campus, where he said that “we must save banks to avoid a complete contraction of economy and a total volatilization of a country’s savings, but we must also look at the black box to see what’s happened so that it doesn’t happen again. And that hasn’t been done”. He was introduced by former Prime Minister and president of FAES, José María Aznar.

“We can’t let the financial system fall, because when a bank goes bankrupt, the money deposited there by citizens disappears along with the Central Bank’s guarantee and the guarantee that a country was guarding all of this ".

“Until open economy societies don’t demand the same level of fair play and good running of listed companies to politicians, we will have a seed: unfair enrichments by a sector of society which gets transferred to regulation through influence-peddling and stops an open society from working as it should”.

“Institutions have to oversee, get the black boxes out and demand responsibilities to all those who have altered the price of money, which is the most negative thing there is; but besides this we should talk about deceit and enrichment of a part and impoverishment of many”.

“It’s a problem of greed and inadequate regulation. I thought it a scandal, not in the BCE with Aznar’s appointments, but in the Anglo-Saxon system, which allowed out of balance sheet operations and huge remunerations which were not suited to entities’ benefit”.

“In an open economy system information cannot fail, supervisors and regulators must look thoroughly at everything that’s happening and there must be responsibility demanded by shareholders and society, because a society where there’s no justice and people don’t receive what they deserve tends to disorder and failure, and countries that don’t work properly are as inefficient as planned-economy countries”.

“Corruption is the great cancer of open society. Countries that have corruption, where wealth doesn’t go to the best but to the person who pays most commissions or who is closest to power, cannot work properly and the system goes crazy. That’s what happens when institutions don’t work properly and people don’t get punished for what they do. Market economies end in institutional corruption, when checks and balances don’t work”.

“There are two things that cannot fail in times of crisis: ideas and institutions. Without them the road disappears, and that’s the worst thing that can happen to a country”.

“Of this crisis, this market and society crisis, we can see glimpses but we don’t really know what’s happening. Crises always have a basis of bad behaviour and, in this case, it’s economic because we are not being able of giving a response to the 21st century problems, and moral because we are not meeting the guidelines we have set”.

“The ‘red lines’ of what we’re living are globalisation, without which we can’t understand anything at all; competition, among States, companies, municipalities, legal and institutional systems…; information, which guides the world; and securitization, because wealth travels at the speed of a ‘click’”.

“A country that’s not competitive in commodities, wages, energy and Rule of Law, will be left out of the market”.