In Santiago, on the first edition of the FAES Campus Chile Aznar with Chile's centre-right presidential precandidates 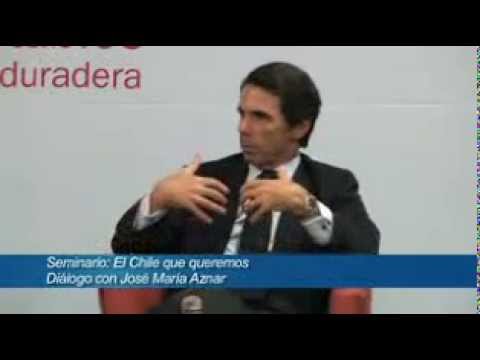 _ The importance of ideas in politics, the need to establish sound institutions, the Welfare State, and political leadership are some of the subjects discussed

The former Prime Minister of Spain and President of FAES Foundation, José María Aznar, held a public dialogue with Chile’s centre-right presidential precandidates, Andrés Allamand and Laurence Golborne. The conversation was titled “The Future We Want” and it took place during the first FAES Campus Chile and was chaired by the president of the Union of Latin American Parties (UPLA), Jovino Novoa.

Allamand, precandidate of National Renewal, and Golborne, precandidate of Democratic Union, pointed to Aznar as a reference of Latin American centre-right parties, praising his ability to add people based on the ideas of freedom and prosperity. Both leaders also stressed that the model of open societies based on freedom defended by Aznar has proved to generate greater well-being.

The public dialogue held by the three took place in Andrés Bello University, which also hosted the first edition of the FAES Campus Chile. The subjects addressed included the importance of ideas in politics; freedom, democracy, institutions and the Rule of Law in Latin America; the Welfare State; the threat of populism; the international scenario; Chile’s future, and political leadership. In this vein, Aznar emphasised that the task of leadership is to have a political project and influence society.

SUCCESS MODEL
In addition to this, during this relaxed dialogue, Aznar and the Chilean precandidates agreed that the strength of institutions is key to the development of countries’ and people’s well-being. The former Prime Minister of Spain recalled that Spain has reaped “successes” for thirty years thanks to the pillars established by the Transition. “If someone comes and says ‘I will destroy those pillars’, success would be over”, he warned. Furthermore, with regard to Chile he said that “your solid institutions are a distinctive feature compared to other countries in the world and in the region, and that is something Chileans must preserve. They should take care of them, improve them and avoid making them more complicated”.

In one of his remarks, Aznar warned about the “European Welfare State’s sustainability crisis” and assured that “employment is the best social policy”. Moreover, he called on young people, who “must participate and get involved in politics”. “Politics should be an invitation to the best” as “a country without good leaders is a country that will endure many more difficulties”, he said.