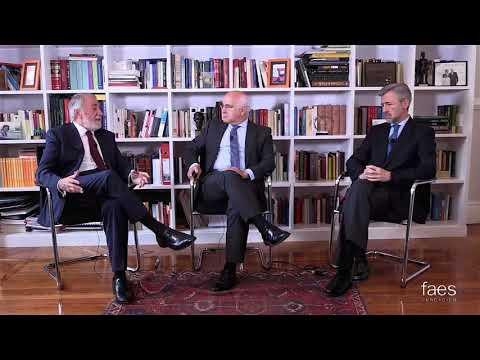 The dissolution of the terrorist group ETA makes us look back to the journey of the counterterrorist policies from 1996 until today. Jaime Mayor Oreja, former minister of Interior and former president of the Popular Party (PP) in the Basque Country; Ángel Acebes, former minister of Public Administrations, Justice and Interior, and Javier Zarzalejos, director of FAES and former general secretary of the Presidency of the Government. They speak in this FAES Dialogues about the strengthen of the Rule of Law, the turning point that was the legal architecture deployed against ETA and its environment during the period of 1996-2004 and the risks of turning the page without regard to the legacy of the victims nor slowing down the project of splitting Spain.

Mayor Oreja, Acebes and Zarzalejos have coincided in pointing out that “the Rule of Law has demonstrated that when it is on, it achieves better results”. In their conversation they have insisted in the fact that “The Popular Party did not discuss or negotiate with ETA, they were only inquest contacts”.  On the other hand, the governments headed by Jose María Aznar challenged the ideas of an infinite tie between ETA and the State and of the socialization of pain, convinced that the defeat of the terrorist group would be impossible “with the law, only with the law, but with all the law”.

LEGAL ARCHITECTURE
As Ángel Acebes has reminded, the legal changes introduced after 1996 responded to this principle, among the effects they ended up with the kale borroka due to the reform of the Children Act and the Criminal Code, that typified as terrorism the street violence and made the parents held liable of, for example, the disturbances that their underage children could cause. The reform on the Criminal Code also made that the penalties were more severe and its effective performance. Simultaneously, the police cooperation with countries such as France and the international with initiatives such as Eeuroorden and introducing ETA to the list of terrorist organisations of Europe and the United States, this marked a final straw to the finances of the terrorist framework. Also as an initiative of the PP the Political Parties Law and the first Victim’s Law went forward.

“The Rule of Law won ETA, but today there is a political split project that is wining” warned Mayor Oreja, for whom the project “was strengthen by the negotiation with the government of Rodríguez Zapater and opened a nearly constituent process that encouraged the nationalisms”. Facing that, he said “we must look or the prevalence of the true, and the only true in terms of terrorism are the victims’ true. But in terms of true, not of story.” specified the three of them, that have rejected the word story because “the word story is part of a resolution of conflicts process, of negotiation”.

To his understanding “the main risk nowadays is Spain; trying to destroy the Constitution of 1978, the legitimation of the right of decision”. “For years we confronted a terrorist organisation and the Rule of Law won; now we have to confront a split project in Spain, with the same mechanism: legislation and the Rule of Law”, he concluded.