At the launch of the FAES report on Inequality in the 2015 FAES Campus FAES REPORT ON INEQUALITYAznar: ‘In Spain, the debate is about the amount spent on social policies and not on resource efficiency’ 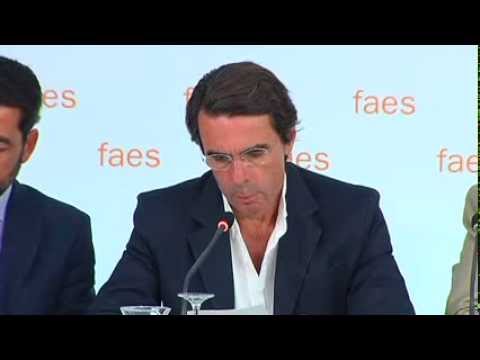 _ He assures that not talking about these issues is ‘throwing stones on our interests, our future and on the most disadvantaged’

The former Prime Minister and president of FAES Foundation, José María Aznar, launched this morning FAES' strategic report 'Inequality, Opportunities and Welfare Society in Spain', of which he said ‘it is essential to talk about this’ as ‘it is absurd not to mention the problems we have on the table right now or that may arise in the future.’ He also regretted that ‘in Spain, the essential debate is about the amount of money that goes into so-called social policies and not into the efficient use of those resources.’

Aznar said that ‘it is essential to talk and debate about this.’ ‘We must warn to all those who say it is impossible to talk about these issues in Spain’, something he described as ‘absurd’ and like ‘throwing stones on our interests, our future and on the most disadvantaged’. He also regretted that ‘in Spain, the essential debate is about the amount of money that goes into so-called social policies and not into the efficient use of those resources’ the former Prime Minister noted, who said that ‘when one compares Nordic models, which have been drastically reformed, one can see that their efficiency in terms of welfare is clearly superior to the Mediterranean management. And that depends on many factors listed here,’ he said referring to FAES’ report.

Aznar referred to some of the major issues analysed in the report, such as the impact of the global economy, the educational model, taxation – ‘the inefficiency of which is creating many problems in the poorest sections of society’ – and the labour market. About the latter he said that ‘when the young and the long-term unemployed are excluded, social transfer mechanisms via pensions or unemployment benefits are much lower, because there is a wage decrease, and therefore, an increase in inequality.’

‘Above all, we must think because we have to make decisions,’ Aznar reiterated, who highlighted the quality of the FAES report saying, ‘the conclusions are very positive’ and that it ‘offers particularly relevant proposals for our country.’

The Director of Economics and Public Policy of FAES, Miguel Marin, said that this report ‘responds to the aim of putting on the table a program of economic reforms that, once the rigors of the crisis have been overcome, will allow us to recover the path of modernization of Spain ‘.In addition, he said, the report ‘gives this program a narrative that makes sense of the work that preceded it, because it aims to build a more competitive, fairer society that is capable of exploiting the many potentials of our country’ he said.