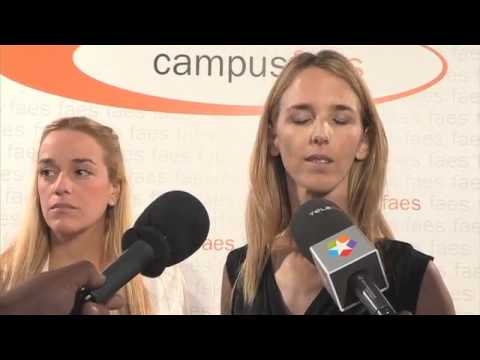 _ The wife of the Venezuelan opposition leader, Leopoldo López, has stated that ‘The way out to the crisis in Venezuela has to be constitutional, peaceful and electoral’

_ Álvarez de Toledo: ‘FAES has an unwavering and active commitment to democracy in Venezuela. Their cause is, has been, and will be, our cause’

The former Prime Minister of Spain and president of FAES Foundation, José María Aznar, has held a meeting this morning with Lilian Tintori, the wife of the Venezuelan opposition leader Leopoldo López, imprisoned by the regime of Nicolás Maduro. In the meeting, both agreed that political prisoners had to be released to ensure the legitimacy of parliamentary elections next December 6, and also that the EU has to get involved on the ground in the observation of Venezuela's democratic electoral process.

After the meeting, which took place on the FAES Campus and which was also attended by the director of FAES' International Department, Cayetana Álvarez de Toledo, Tintori declared to the media her thanks to Aznar, of whom she said ‘he has listened to us since our inception in the defence of democracy in Venezuela and has always been there to give us a helping hand, encouragement, hope and faith to achieve our goal.’

‘Venezuela is suffering a political, economic and social crisis and is on the verge of a humanitarian crisis. My husband, Leopoldo López, has been in prison for a year and four months now, and has been in isolation for nine months, suffering torture and inhuman treatment. Leopoldo López is innocent and should never have been imprisoned. He represents the future, hope for Venezuela, and today we demand his release and that of 75 political prisoners in Venezuela,’ Tintori said.

She also reminded everyone that Leopoldo López has just finished a hunger strike which has lasted for 30 days ‘demanding a date for parliamentary elections, qualified international observation, the release of all political prisoners and the end to persecution, repression and censorship in Venezuela.’ ‘The sad reality of Venezuela is that leaders have to go on hunger strikes to draw national and international attention,’ Tintori regretted.

‘Thanks to this effort and sacrifice we have an election date, but we need to have international observation in Venezuela, there is a crisis, but we now see a way out. A way out that has to be constitutional, peaceful and electorally qualified, therefore, it is very important that UNASUR, OAS and the European Union become observers from now on of this process so that it may actually take place, as Leopoldo always says, constitutionally and in peace’, she explained to the media.

In her view, ‘in Venezuela there is a crisis, but we now see a way out. A way out that has to be constitutional, peaceful and electoral’. ‘These elections are to be held on 6 December and for this we will need freedom of representation. Our leaders must be released so that they may run as candidates for the National Assembly’, Tintori demanded, who also said that ‘the majority of the Venezuelan people, 85 percent, want a change.’

‘We in Venezuela have a deep commitment to freedom and human rights. We have lived through some very difficult years and in these last two years we have seen the worst side of repression, torture, unfair imprisonment, murder, and in sight of this our focus is freedom for Venezuela and the protection of human rights.

Tintori also referred to the recent and ‘very strong’ statements that have taken place in Latin America about the situation in Venezuela, and she thanked Spain, ‘which has acted as a sister country in this struggle of the Venezuelan people.’

DEMOCRATIC DIGNITY
Previously, the director of the International Department of FAES, Cayetana Álvarez de Toledo, said that ‘for FAES it is an honour that Lilian Tintori is here with us and we want to extend our thanks and our support to her. Lilian and Leopoldo López, her husband, are a monument to democratic dignity, personal courage and commitment to freedom. FAES has an unwavering and active commitment to democracy in Venezuela. Their cause is, has been, and forever will be our cause too.’

‘President Aznar recently promoted the Declaration of Panama which has already been signed by more than 30 former Heads of State demanding the release of all political prisoners. As MP of the Popular Party, I have also promoted in the Congress of Deputies a non-legislative motion, supported by an overwhelming majority, calling for the release of political prisoners,’ she underlined.

‘What we want to say very clearly today is that there must be freedom for political prisoners and free elections in Venezuela. It is not possible that Leopoldo López remains in jail. Elections need to be held. Democracy is a Leopoldo out of prison and campaigning on the street with all his party colleagues. A democratic, free, transparent campaign’ she said.

To which she added: ‘From FAES we want to deliver an express request to the European Union not only to assume a moral commitment to democracy in Venezuela but also an active commitment on the ground. That is, it must get involved in the democratic observation of the elections. An observation that has to be comprehensive, effective and immediate. It should start now because this could ensure that conditions of transparency and discussion of all political groups and all sensitivities are respected’.

‘Our absolute support to Leopoldo, Lilian, to the cause of freedom in Venezuela. We demand freedom for prisoners, free elections, the involvement of the European Union and a comprehensive, effective and immediate observation starting now,’ she reiterated.

On Saturday, July 4 Tintori will participate through a recorded message in the 2015 FAES Campus session dedicated to the violation of human rights and freedoms in Venezuela. Under the heading 'Democracy, populism, dictatorship', FAES will also give the floor to the director of the newspaper El Nacional de Caracas, Miguel Henrique Otero, and to Mitzy Capriles, wife of the mayor of Caracas, Antonio Ledezma, also a political prisoner.